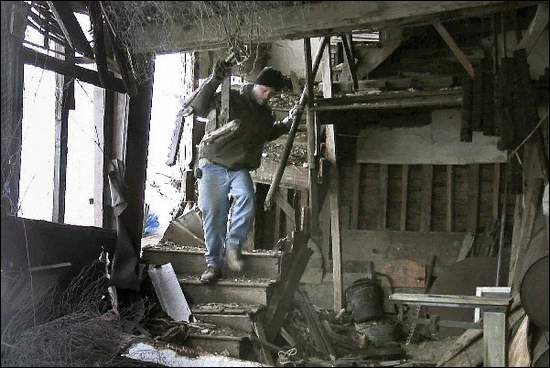 Richard Deys of Macedon carries an old wagon jack down the stairs as he works to stabilize the 1816 Quaker Meetinghouse in Farmington. (Photo courtesy Democrat and Chronicle)

The Friends of the 1816 Farmington Quaker Meetinghouse announced in 2008 that stabilization of the site had been completed and fund-raising would begin to restore the historic structure, which played a significant role in the 19th century abolitionist and women’s rights movements. Under the leadership of Judy Wellman and Helen Kirker, both members of the Friends of the Women’s Rights National Historical Park, the Meetinghouse Friends raised more than $25,000 to stabilize the building, which had been severely damaged by a storm in 2006 and was in danger of collapsing. The National Park Service will be undertaking a study on the possibility of acquiring the meetinghouse and making it part of the Women’s Rights National Historical Park.